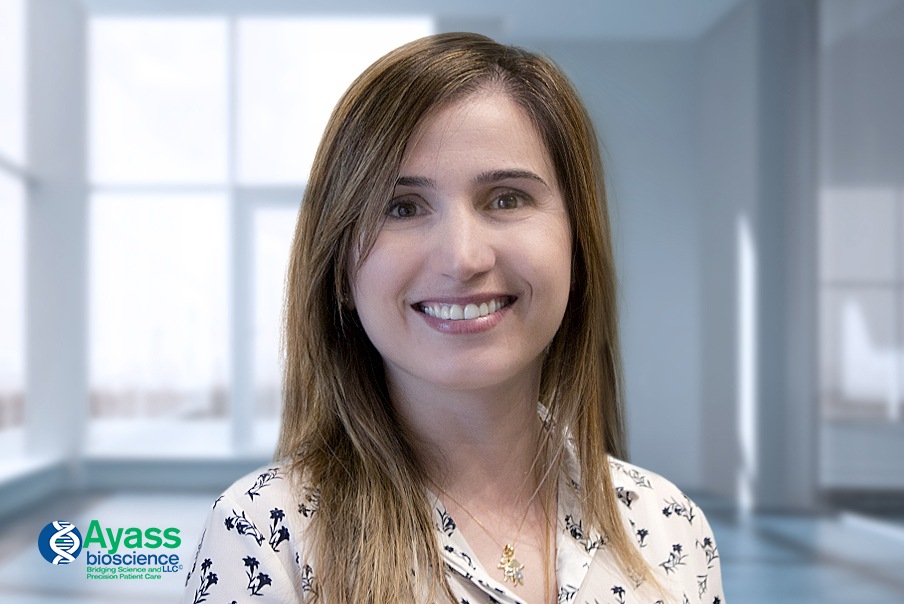 Lina Abi Mosleh, Ph.D.Principal Scientist at Ayass Bioscience and Vice President
Lina is the Vice President and Principal Scientist at Ayass Bioscience, LLC with the responsibility to oversee, manage, and lead daily operations in both the clinical and research laboratories. Prior to joining Ayass Bioscience, her career was focused on basic science research in academic institutions where she served as a faculty member. The opportunity presented at Ayass Bioscience allowed her to utilize her skills and dive into the world of translational research by bridging science to patient care. She is involved in the design, development, and validation of high complexity molecular testing from next generation sequencing to array-based genotyping assays. She is also part of a research team that utilizes nanotechnology for diagnostic applications, identifies and clinically validates new biomarkers for autoimmune disease, and develops aptamers for diagnostic and therapeutic applications in the fields of coagulation, allergy, cancer, and COVID-19.
Ayass Bioscience has been a pioneer in implementing artificial intelligence to predict patient outcome. It started with the development of ‘MoNet’, an advanced biological tool that uses CAI (Cognitive Artificial Intelligence) to collect and analyze data from hundreds of molecular tests conducted on thousands of patients at Ayass Bioscience to identify clinical associations between biomarkers and generate a prediction score for an individual’s risk of thrombosis. Lina had the privilege to be part of that project that opened the door for the development of Machine Learning Models for the prediction of patient outcome as it relates to cancer and metastasis. With data produced at an unprecedented rate, the new direction of Ayass Bioscience is to implement such tools to build models for prediction for better patient outcome in other disciplines of medicine such as immunology as well as in the biomedical research conducted.

Lina earned her Bachelor’s and Master’s in Cell Biology at the American University of Beirut in Lebanon. Upon moving to the U.S., Lina received her Ph.D. in Molecular Genetics and Biochemistry at the University of Texas Southwestern Medical Center at Dallas in the laboratory of Nobel laureates Drs. Michael S. Brown and Joseph L Goldstein. 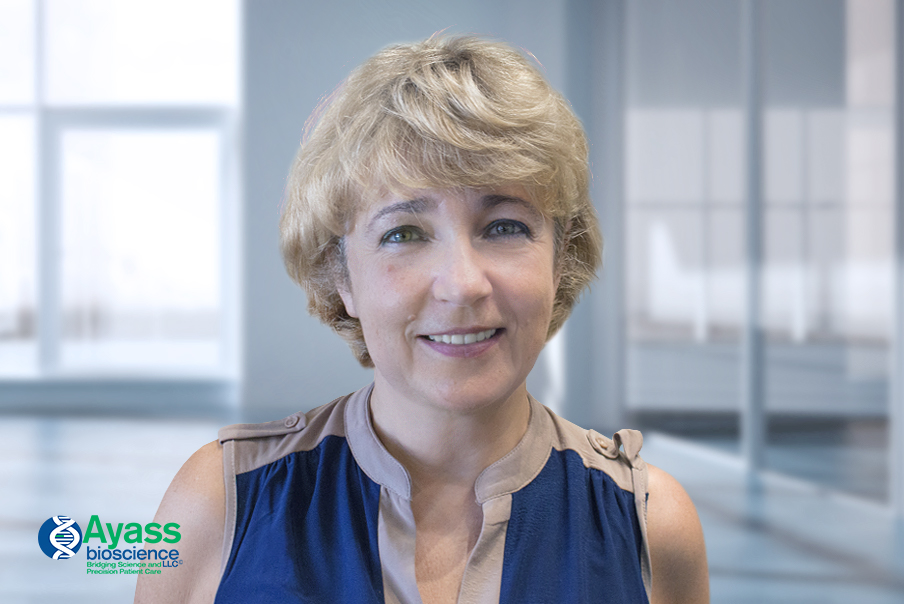 Natalya Griko, Ph.D.Senior Scientist
Natalya is the Senior Scientist at Ayass Bioscience, LLC with the responsibility to oversee and manage high-complexity genetic testing and lead numerous research projects. She has multiple years of of experience in protein chemistry, molecular biology, microbiology, and functional and structural biology in both academia and biotech industry settings.
At Ayass Bioscience, she is involved in the design, development, and validation of high-complexity molecular testing ranging from next generation sequencing to array-based genotyping assays. Her major research project is the development of aptamers against coagulation disorder biomarkers. She has successfully developed an aptamer for the detection of D-dimer levels in blood sample and a Thrombin aptamer as a potential anticoagulant agent. Currently she is involved in the development of the aptamer-based Lateral Flow Assay as a point-of-care test for assessing an individual’s risk of clot. She is also part of the proteomics team for identification and validation of new biomarkers for autoimmune diseases, cardiac diseases, coagulation, and other disorders.

Natalya earned her Master’s degrees in Biophysics at Saint Petersburg State University in Saint Petersburg, Russia, and her Ph.D. in Molecular Biology at the Institute of Protein Research in the scientific center of the Russian Academy of Sciences near Moscow. After receiving her Ph.D., Natalya worked as Senior Research Scientist at the Biological Center of Russian Academy of Sciences. Subsequently, she moved to the U.S. where she worked as a Research Scientist at the University of Texas, Dallas, and then worked as a Senior Research Scientist for a biotechnology company before joining Dr. Ayass’s team as their Molecular Biology Scientist. 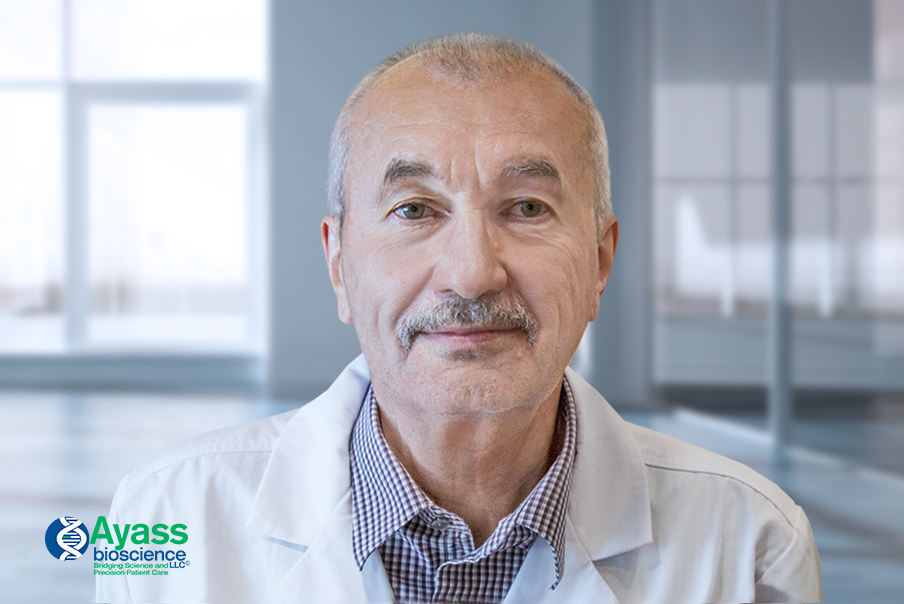 Victor Pashkov, Ph.D.Research Scientist
Victor is a Research Scientist at Ayass Bioscience, LLC with the responsibility to conduct high-complexity genetic testing and participate in research projects. He has multiple years of experience as a biomedical research scientist with expertise in molecular biology, molecular genetics, and genotyping. He is involved in the design, development, and validation of high-complexity genetic testing such as Pharmacogenetics and Hereditary Cancer Assessment. He demonstrates advanced skills in biological and biotechnological systems through the optimization of several protocols for DNA and RNA extraction, PCR, genotyping by mass-spectrometry, and data analysis.
Victor is a valuable member of the Ayass Bioscience research team. He participates in all research projects utilizing his knowledge in biochemistry, immunochemistry, and molecular biology. Among his contributions, Victor developed binding assays to confirm the binding of aptamers to the target molecules.
Victor earned his Master’s degree in Biophysics at Lomonosov Moscow State University and his Ph.D. in Biochemistry at Shemyakin-Ovchinnikov Institute of Bioorganic Chemistry, of the Russian Academy of Sciences. Victor worked in the Biological Center of the Russian Academy of Sciences. After he moved to the U.S., he held a research scientist position at the Cornell University Medical Center and at the UT Southwestern Medical Center. He joined the Ayass BioScience team as a Research Scientist. 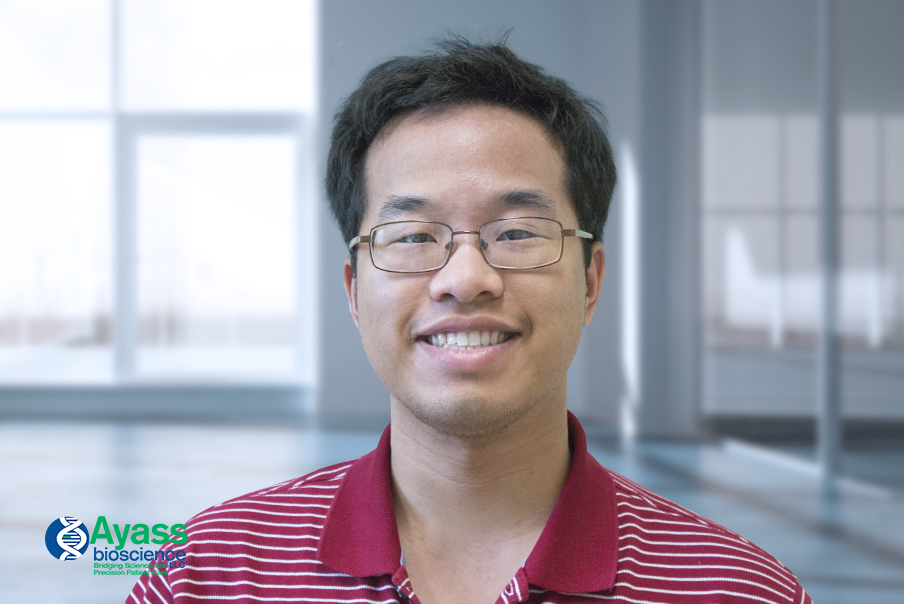 Kevin Zhu, M.S.Bioinformatics Specialist
Kevin is part of the Bioinformatics team at Ayass Bioscience, where he works to improve understanding of clinical data through computational and statistical methods. As a member of the Ayass Bioscience team, he manages the data and data analysis for various projects at the company, including aptamer research, development of genetic and other lab-developed tests, proteomics research, and many others, along with providing consultation on the computational aspects of these projects. He also helps to prepare SOPs and validation reports for some of the tests, as well as assisting in identifying targets for testing of various diseases. Additionally, Kevin conducts statistical analysis on the results from clinical laboratory tests, providing insight into the connections between biomarkers and identifying trends among the patient populations. He has developed software tools both to help analyze data from various sources as well as to improve efficiency in various aspects of the business and is one of the primary contributors to the development of the MoNet software. He is involved in the marketing parts of company as well, helping to arrange direct-to-consumer products and prepare informational resources.

He joined Ayass Bioscience after receiving his Bachelor’s in Computational and Applied Mathematics from Rice University and his Master’s in Bioinformatics from the University of Texas Health Science Center at Houston. 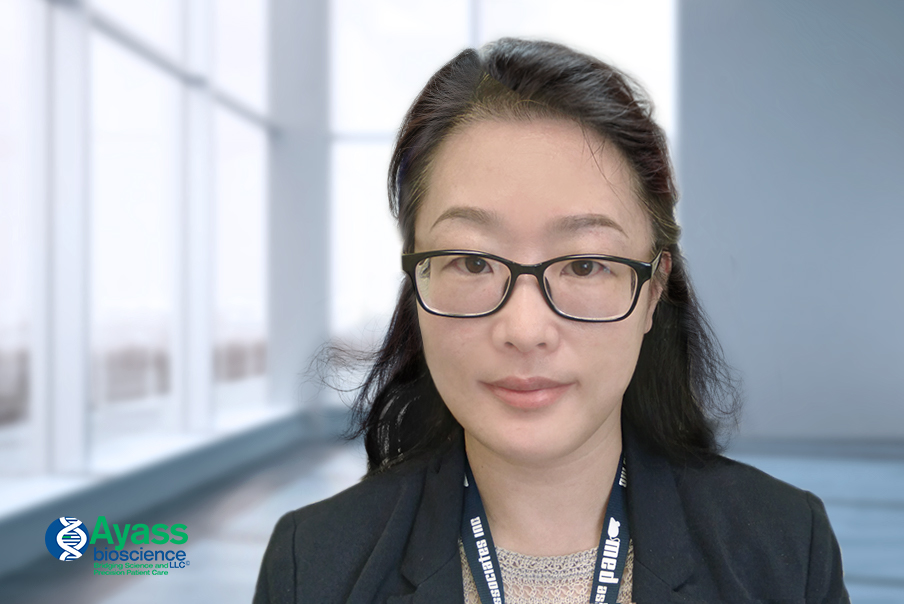 Jin Zhang, M.D., MPH, M.S.Epidemiologist
Jin is the epidemiologist at Ayass Bioscience, LLC with the responsibility to provide research design and methodological experience on clinical data analysis. Before joining Ayass Bioscience, she worked for the University of Texas Southwestern Medical Center on HIV cluster detection and public health response.
The opportunity presented by Ayass Bioscience enabled her to put her expertise in experimental design, planning, data analysis, modeling and projections, bioanalytical parameter determinations, and validation of various assays and clinical sample bioanalysis. She is working on the research of the discovery of biomarkers in COVID-19 diagnostic testing.
Jin received her M.D. degree from the school of Medicine, China Three Gorges University, China. She earned her Master’s degree in Pharmacology and Toxicology from the University of Mississippi Medical Center and MPH degree in Epidemiology and Biostatistics from the School of Public Health, Jackson State University after moving to the United States. 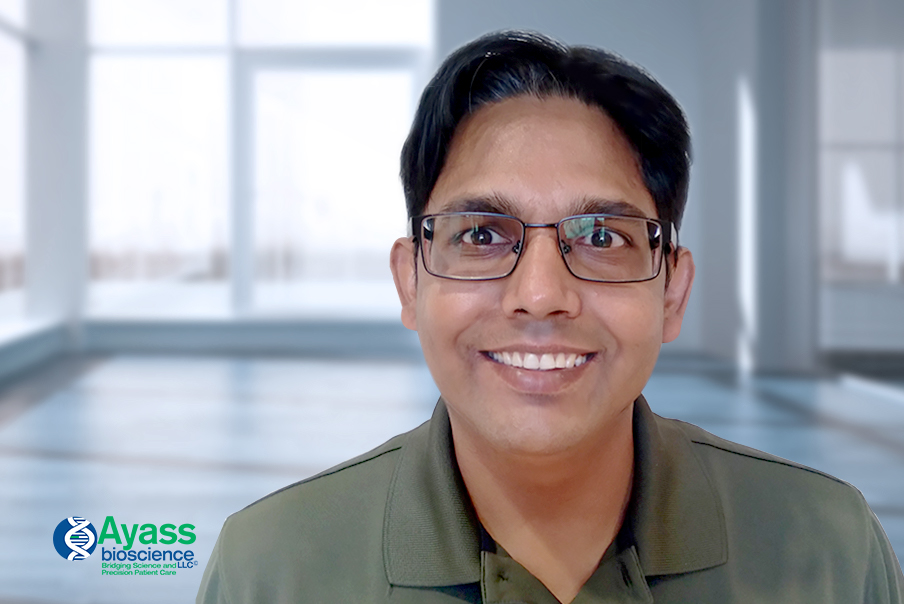 Trivendra Tripathi, Ph.D.Flow Cytometry Scientist
Dr. Trivendra Tripathi (Flow Cytometry Scientist) has expertise in designing and validating clinical flow cytometry assays for immunophenotyping in leukemia and lymphoma, profiling and subsetting cells such as lymphocytes (T cells and B cells), stem cells, myeloid cells, macrophage and monocyte subpopulations, intracellular staining, and rare cell detection. He is part of the R&D team at Ayass Bioscience and is involved in developing in vitro diagnosis and targeting therapies for many diseases.

Dr. Tripathi is also responsible for designing an immune profile flow cytometry panel for COVID-19 patients and correlating the findings to mass spectrometry.

Before joining Ayass Bioscience, Dr. Tripathi worked at AbeXXa Biologics, Inc. His prior appointment was as a Senior Research Fellow at Mayo Clinic, Scottsdale, AZ. He also received postdoctoral training from UNT Health Science Center at Fort Worth and Baylor Institute for Immunology Research, BSWRI at Dallas. Dr Tripathi earned his Ph.D. degree in Biochemistry at Aligarh Muslim University, India. He also holds a Master of Science degree in Biotechnology from CSJM University, India and a Bachelor of Science (Hons.) degree in Chemistry from AMU, India.

James earned his bachelor’s and doctorate degrees in Bioengineering from the University of Pittsburgh. During his studies, he developed a passion for using computational methods to guide biological discoveries. His doctorate research focused on using machine learning to predict acoustic features that are optimized for robust hearing and correlated the predictions to physiological observations, providing a novel framework for understanding feature encoding in the auditory cortex. After graduation, he worked as a data scientist at UT Southwestern where he applied deep learning and imaging analysis to identify cell types from pathology images and to predict lung cancer patient prognosis. He joined the Ayass Bioscience, LLC Bioinformatics team in October 2022. 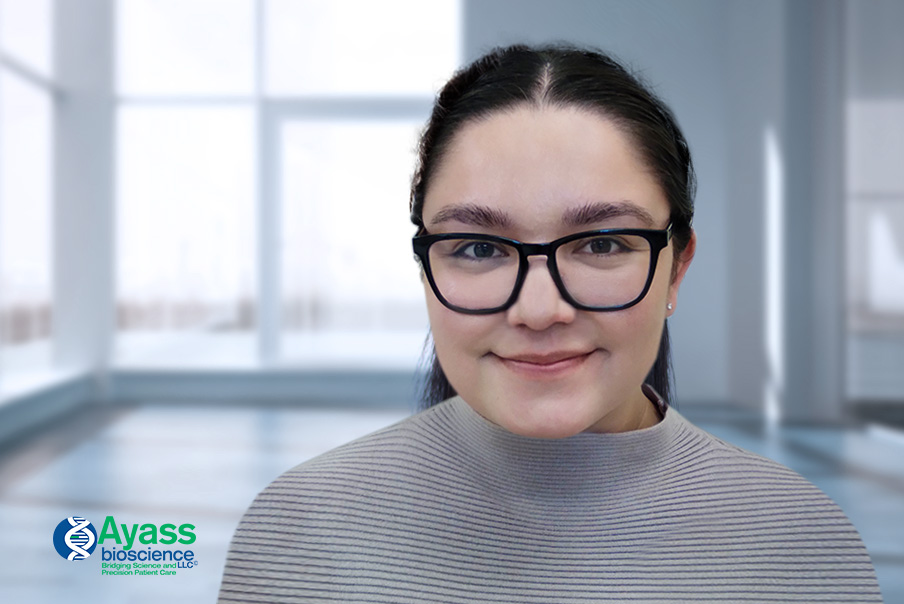 Before joining the Ayass Bioscience,LLC team, Kristen worked as a Research Assistant where she explored different pathologies via machine learning and data mining techniques. One of her projects aimed to better understand post translational modifications in the context of neurodegenerative disease and was successfully able to discover a novel motif conserved within the FICD domain of the target. Kristen also worked on determining the structure and function of unknown classes of GPCRs and tested their different isoforms against known ligands via protein-ligand docking. Currently, she is working on T-Cell profiling to better understand the pathology of Rheumatoid Arthritis. 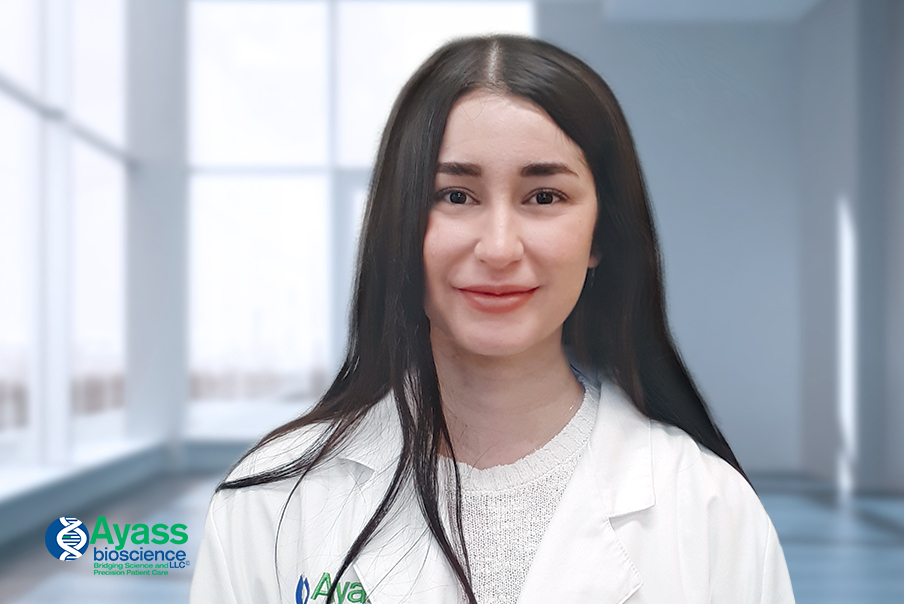 Tutku Zeynep Okyay, M.S.Molecular Biology Researcher
Tutku earned her bachelor’s degree in bio engineering from both Montana State University and Istanbul Technical University with a dual degree program. Then, she pursued her master’s degree and graduated Fall 2019 from Montana State University with a master’s degree in Immunology and Infectious Diseases. During her education, she worked as a Research Assistant in Lei Lab in Montana State University. In Lei Lab Tutku conducted research on pathogenesis of Group A Streptococcus virulence factors, ScpA and SpeB, where she learned valuable professional skills such as recombinant DNA construction, creating site-directed mutagenesis, interpreting the sequence alignments, protein purification by using ion exchange chromatography and so on. Also, Tutku have gained experience working with pulmonary mouse models. Fall 2019, she worked as a Teaching Assistant for Human Anatomy and Physiology II Lab, where she gained the ability to lead and teach students. Tutku joined Ayass BioScience Research team in February, 2020 as a Research Technician and involved in DNA extraction from human biological samples for next generation sequencing, performed SDS page gel, Western-Blot Analysis, immunoprecipitation, Pierce Rapid Gold BCA and Micro BCA Protein Assays. She is currently responsible of viral RNA extraction of COVID-19 patient samples and the detection of SARS-CoV-2 in extracted patients’ samples by using RT-qPCR technique. 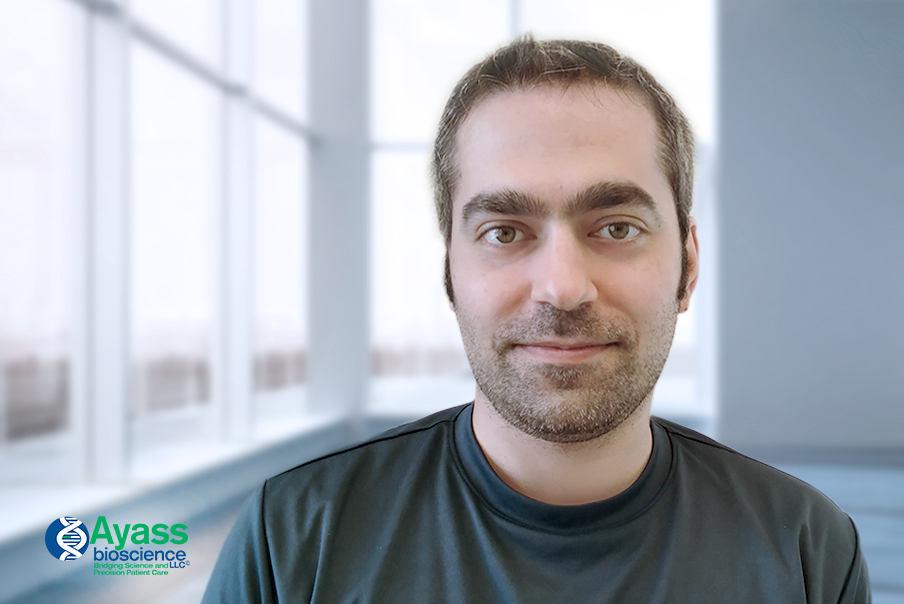 Amir is a Bioinformatics Analyst at Ayass Bioscience with a Master’s degree in Medical Physics and Imaging from Vienna University of Technology. He has worked as a project assistant at the Medical University of Vienna on a project to detect and compensate for motion during PET imaging of patients with lung cancer using a Data-driven method that captures the respiratory signal from the patient’s data and utilizes this data to track the respiratory motion.

Amir is enthusiastic about Machine learning, Deep Learning and Statistical Analysis and is involved with processing of COVID-19 tests, Next Generation Sequencing data as well as analysis of proteomics and medical data in Ayass Bioscience, LLC.

If you have any questions about Ayass BioScience, LLC Team or their qualifications, please call today at 972-668-6005 or fill out our contact form on the bottom of this page. We will answer any question you might have.